Reproduced with the kind permission of The Everyday French Chef. Please visit her site for excellent French recipes. 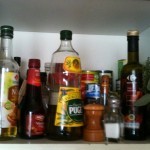 The quality of the ingredients you use will be key to your success as an everyday French chef. What follows is a description of  food products that are regularly used in French cooking — ingredients to have on hand in your kitchen, to look for in markets or at the supermarket, or to order (or grow yourself) if they are unavailable in your region.

In general, if a recipe calls for something you cannot find — fresh figs, for example — the best approach is to substitute something similar, like plums in this case. Let your common sense be your guide. All the great French chefs have been creative. On the other hand, certain ingredients have such a distinctive flavor or texture that there is no acceptable substitute. They include the kitchen staples listed below.

This list is a work in progress and will be updated from time to time.

Black pepper / I use it in nearly all savory dishes, even though it is becoming increasingly expensive. Get the peppercorns and grind them in fresh each time you cook. Ground pepper sold in little plastic pots is to be avoided at all costs.

Butter / Most French recipes call for unsalted butter. Use the real thing, not margarine or other substitutes.

Crème fraîche / Less sour than sour cream, thicker than heavy cream, crème fraîche is usually unavailable outside of France, so what to do if you can’t find it? There are plenty of recipes online for making your own crème fraîche – usually a mixture of heavy cream and buttermilk that is allowed to ferment overnight – but it is easier for everyday chefs to use a substitute. For recipes on this site, I would suggest substituting heavy cream plus a small squeeze of lemon juice when crème fraîche is called for. The trouble with sour cream is that it is thickened artificially — often (vegetarians, beware!) with gelatin, which is typically made from byproducts of animal parts, like the hooves and skin of pigs and cows. Crème fraîche, on the other hand, is entirely natural.

Fresh herbs / Creative use of fresh herbs can boost French cooking from great to spectacular. My favorites — and I do grow some of these myself — are rosemary, thyme, sage, cilantro, dill, basil, chervil, parsley, mint, tarragon and chives. If you are new to this, take a look at the excellent visual guide to fresh herbs on epicurious.com.

Lemon juice / Use only real juice from freshly squeezed lemons – never anything that comes out of a plastic container shaped like a lemon, no matter how real it says it is. Bottled lemon juice is made from concentrate and contains additives. It tastes totally different from real juice. When using lemon juice while cooking — adding a dash to soup, for example — squeeze the lemon through a sieve held over the pot to filter out the seeds.

Mustard / It is very hard to find Dijon mustard outside of France. Why this should be is a mystery to me. The mustard sold as Dijon in the States — Grey Poupon — is sweeter than the French variety, apparently to suit the American palate. But this distorts the taste. Go for the real thing if you can possibly find it. Do not use grainy mustards like Moutarde de Meaux unless they are specifically called for in the recipe.

Olive oil / Use extra virgin cold pressed. It’s worth the cost — do not settle for anything less.

Rice / In general, choose basmati or a similar long-grain rice. Basmati is more flavorful and natural than many commercial brands of white rice sold in the West. The exception is when making dishes like risotto, where the use of medium- or short-grain rice is essential to success. As for brown rice, it is not used in traditional French cuisine but appears (very occasionally) on Parisian menus these days and can marry well with  some French dishes.

Saffron / This wonderful spice comes from a purple crocus, and some masters of the culinary arts might argue in favor of using the variety sold in threads – the actual stigmas of the flower. But for everyday chefs, powdered saffron is preferable. It is much easier to use and just as flavorful.

Sea salt / As it is more intense and flavorful than table salt, it is regularly called for in recipes like soups and stews. There are many qualities of French sea salt, all of which have the advantage of being natural. I prefer sel de Guérande, which comes from the Brittany coast, but there are many other fine varieties from France and elsewhere. If sea salt is unavailable, kosher salt is a good substitute. As for table salt, any kind will do.

Tomatoes / Shop around. The closer you can get to actual tomatoes grown in soil, the better the flavor will be. This does not mean you need to use expensive heirloom varieties. Normal red tomatoes are just fine, but they will be far tastier if grown nonintensively  and in the ground instead of hydroponically (without soil), as so many are these days. If tomatoes on the vine are available, choose them over other commercial varieties. Fresh farm tomatoes and organic tomatoes would be my first choice.

Vinegar / Red wine vinegar is traditional in French cooking, but it is increasingly being pushed aside by balsamic. It’s not necessary to break the bank on this — good quality imported balsamic vinegar is available these days at reasonable prices. The recipes on this site specify which kind of vinegar to choose. Do not substitute cider vinegar or white vinegar for red wine vinegar, ever.